Protest Efforts and the Vietnam War: Film and Visual Tools

Historical information on protests during the Vietnam War 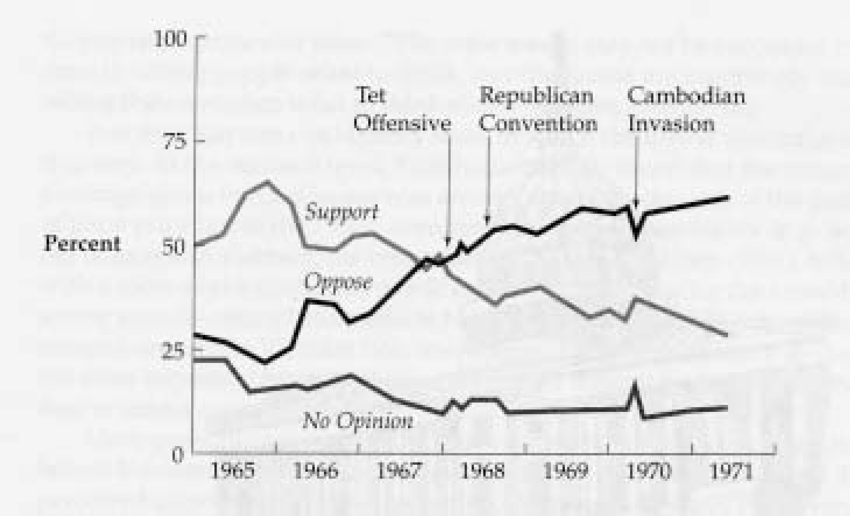 This is a line graph obtained from an article written by UCLA professor David Sears and University of Washington professor Rick Kosterman. The article itself is not included because the preponderance of the material is not related to this topic, but the graph is relevant because it demonstrates how the decline of support for the war over time was correlated to the increase in opposition. There was no significant numerical change among those who had no opinion. This graph allows us to observe how opposition to the war changed in relation to the Tet Offensive, the Republican Convention of 1968, and the Cambodian Invasion, three major developments of the period which had massive implications for the conflict.

This article, written by University of Maryland professor Shawn J. Parry Giles, analyzes the motivations of John Kerry and Vietnam Veterans Against the War. He asserts that VVAW’s repudiation of the war constituted an attempt to seek “personal and community redemption.” Veterans were naturally seen as the most suited to denounce the war, due to them being most intimately involved in it. In contrast, the Nixon administration was intent on painting them as traitors. Especially significant, is the fact that after delivering his impassioned testimony, Kerry was commended by members of the U.S Senate Committee on Foreign Relations. Undoubtedly, this lends to his standing as an effective opponent of the war, which should be contrasted with protesters who were less well-received.

Bill Ayers gives a retrospective interview on the actions of the Weather Underground, the climate surrounding their formation, the Vietnam War and the contemporary influence of the group's formation and actions.

John Kerry’s impassioned testimony before the Senate Committee on foreign relations perfectly encapsulates the sentiment of many American soldiers who returned after fighting in Vietnam. In a soft-spoken manner, he tells the committee how he felt betrayed and lied to by the administration. He insists that the war did not in any way advance American interests and that the Vietnamese themselves had no understanding of its purpose. Kerry expresses solidarity with other protesters. His testimony should be contrasted with the behavior of the more firebrand protesters.