Working with Print-Disabled Youth: How to Read

A guide on reading, literacy, and access to information for adults who support print-disabled children.

There are many options for people who can’t see text or turn pages to read. Choosing a format might be based on the specific nature of a person’s print disability, comfort with technology, individual preferences, and the purpose of reading. This page explains the primary ways for print-disabled people to access the written word, which have increased greatly with advances in technology.

Braille is a tactile writing system that is universally recognized as the literacy medium for people who are blind or severely visually impaired. Braille, unlike audio, is a direct corollary to print.

Raised dots, traditionally printed on embossed paper, are used to represent letters of the alphabet, numbers, punctuation marks, mathematical equations, music notes, and more—it is a direct corollary to print. Braille is read by moving moving one or more fingers (generally the index fingers) along each line from left to right. Usually, both hands are involved in the reading process as one hand reads a line while the other hand locates the beginning of the next. The average reading speed is approximately 125 words per minute.

Braille was invented nearly 200 years ago by a blind child in France named Louis Braille, who modified a military secret code called “night writing.” The braille cell, the basic unit for reading and writing braille, is an arrangement of six dots that can form 63 distinct patterns.

A braille alphabet card, image via the National Braille Press

This sort of braille—in which one cell translates to one letter, number, or symbol—is typically used by beginners, while a short-hand braille in which common words are expressed as simple symbols has developed for more experienced readers. These two types of braille are called uncontracted, or grade 1, and contracted, or grade 2, respectively.

Braille can also be read using devices called refreshable braille displays or notetakers that connect via cable or Bluetooth to computers, tablets, or smartphones. Small metal or plastic pins move up or down to display in braille, line by line, the text that appears on the screen. (Some of these devices allow users to also write, not just read, in braille.) This type of braille is often called electronic braille, or ebraille, to distinguish it from paper braille. Braille can also be read by printing text with a braille embosser, a corollary to an ink printer that renders text as tactile braille cells and prints it as hard copy.

Today, the National Braille Press estimates that only one out of five blind schoolchildren use braille, down from roughly half in the 1960s. Advocates have called this braille literacy crisis a social justice issue with significant consequences: The National Federation for the Blind found in 2009 that over 70 percent of blind adults were unemployed, and up to 50 percent of blind high school students dropped out of high school. In the words of the American Foundation for the Blind, “Literacy—the ability to read and write—is vital to a successful education, career, and quality of life in today's world… Braille is an irreplaceable and modern method for literacy.” Advocates recommend braille as an essential tool to complement modern technologies. Braille literacy resources can be found in other parts of this guide.

Large-print format uses larger fonts to assist people with low vision in reading more easily. While most newspapers and books use between 8- and 12-point type, the American Council for the Blind recommends using at least 18-point type, using a bolded, sans-serif font, and line spacing of 1.5 or greater for large-print documents.

Most major publishers produce some large-print materials, including bestselling fiction, and large-print collections can be found in most public libraries.

This text is 12-point Verdana font.

Talking books are a form of human-narrated audiobooks specifically designed for the print-disabled community. The first talking books in the U.S. were produced on long-playing records (LPs) by the American Foundation for the Blind in 1934. Today, talking books and magazines are distributed on plastic flashdrive cartridges and played on a digital talking-book machine. These players allow users to adjust the tone of the narrator's voice as well as its speed and have built-in audio instructions.

Talking books are available only to the print-disabled community since they are not bound by traditional copyright restrictions. In order to support easier access to materials, both braille and talking books can be produced without the permission of the copyright holder or payment of royalties. 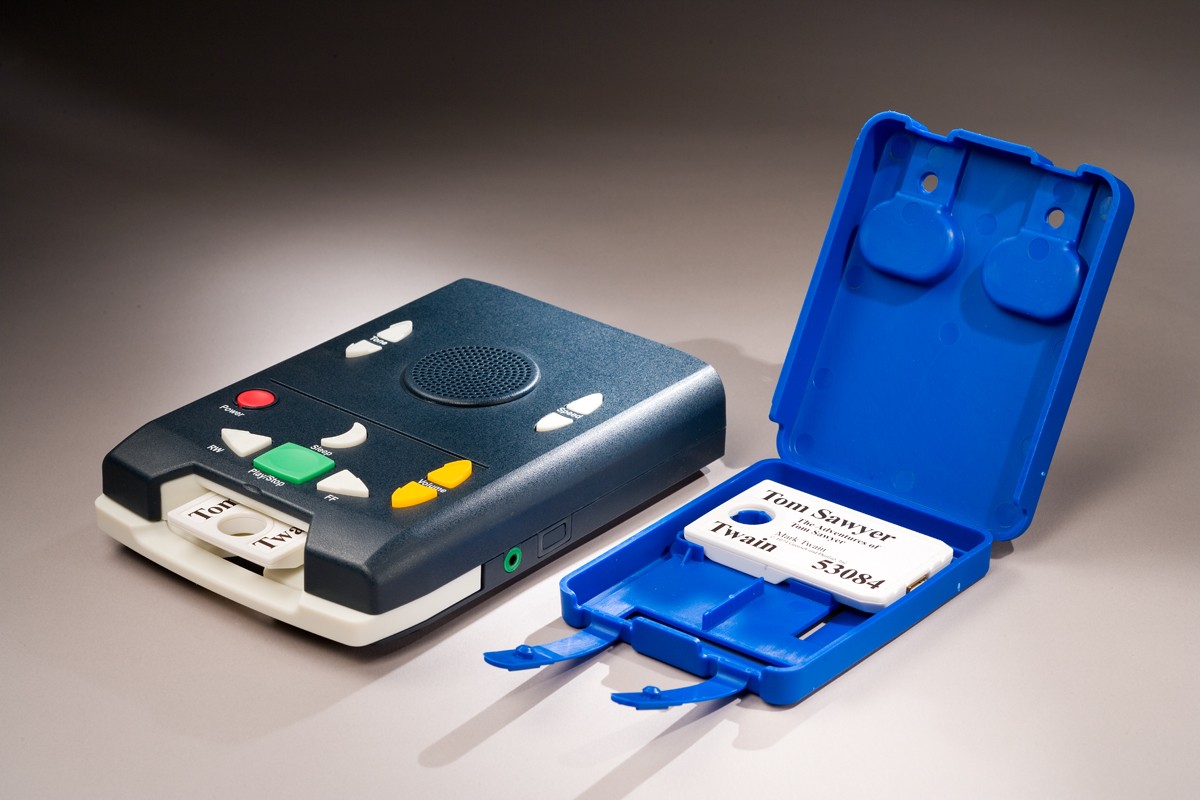 A talking book and a talking-book player, image via    NYPL

Audio books are also available in a variety of other formats, particularly streaming or downloadable audio. Depending on the source, this audio might be specially formatted for or have accessible options for people with print disabilities.

Screen readers: Software that reads the text displayed on a computer screen with a speech synthesizer (essentially speaking the words out loud) or braille display. Some screen readers are built-in to operating systems (such as Narrator for Windows and VoiceOver for Apple products) while others are third-party, like JAWS.

Screen magnifiers: Software that enlarges the size of content on the screen display, similar to a magnifying glass over a page, and allows other adjustments such as color inversion or tinting. Popular options include MAGic and ZoomText.

Braille translation software: Program that translates electronic documents into braille code, to be printed by a braille embosser or read with a refreshable braille display.

Alternative input devices: Physical devices used by people who cannot operate a mouse, keyboard, or touchscreen on a computer. This category includes devices such as head pointers, in which a person without use of their hands uses a stick mounted to their head to type on a keyboard.

These are just a few examples of assistive technologies that ideally create an equivalent experience to sight-reading printed text.

American Council of the Blind. (n.d.). Description and history of braille. Retrieved from https://www.acb.org/history-of-braille

American Council of the Blind. (2011, July 12). Best practices and guidelines for large print documents used by the low vision community. Retrieved from https://www.acb.org/large-print-guidelines

American Foundation for the Blind. (n.d.). Braille. Retrieved from https://www.afb.org/blindness-and-low-vision/braille

National Federation of the Blind. (2009, March 26). The braille literacy crisis in America: Facing the truth, reversing the trend, empowering the blind. Retrieved from https://www.nfb.org/images/nfb/documents/pdf/braille_literacy_report_web.pdf

Novak, M. (2017, June 14). The first audiobook: An LP for the blind. Pacific Standard. Retrieved from https://psmag.com/social-justice/a-brief-history-of-talking-books-for-the-blind-work-in-progress-55975