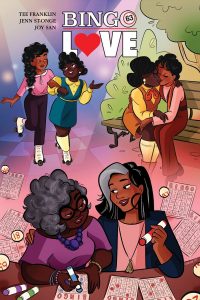 Hazel and Mari meet as teenagers in 1963 and become fast friends. A kiss in front of a church turns their relationship into something more. Their romance blossoms until Mari’s grandmother catches the couple and her homophobia tears the two apart. As time passes, Hazel marries James and starts a family, and her sexuality becomes invisible to all but her. A serendipitous night out at the bingo hall reunites Hazel and Mari, who are now in their 60's and have a second shot at love.

Miles Morales, the ultimate Spider-Man, is back in action with a new status quo and a new outlook on life! It's the anniversary of Peter Parker's death, but as the world mourns the original Spider-Man, a gathering of Spidey's friends and foes reveal some shocking truths about Peter and his world! A big, big villain from Peter's past is alive and well...and about to turn New York upside down! Now, Miles must come face to face with the worst nightmare of the Spider-Man legacy: Norman Osborn, the Green Goblin...the man who killed Peter Parker...or did he?

Cat isn't happy about leaving her friends for Bahía de la Luna, but her little sister Maya has cystic fibrosis and will benefit from the cool, salty air that blows in from the sea. As the girls explore their new home, a neighbor lets them in on a secret: There are ghosts in Bahía de la Luna. Maya is determined to meet one, but Cat wants nothing to do with them. As the time of year when ghosts reunite with their loved ones approaches, Cat must figure out how to put aside her fears for her sister's sake, and her own.

Amina has never been comfortable in the spotlight. She is happy just hanging out with her best friend, Soojin. Except now that she’s in middle school everything feels different. Soojin is suddenly hanging out with Emily, one of the “cool” girls in the class, and even talking about changing her name to something more “American.” Does Amina need to start changing too? Or hiding who she is to fit in? While Amina grapples with these questions, she is devastated when her local mosque is vandalized. Jin Wang is the only Chinese-American student at his school, but he just wants to be an all-American boy. Danny is an all-American boy, but his obnoxious Chinese cousin Chin-Kee's annual visit is such a disaster that it ruins Danny's reputation at school. The Monkey King has lived for thousands of years and mastered the arts of kung fu and the heavenly disciplines, but there's no place in heaven for a monkey. These three characters are going to have to find a way to help each other if they want fix the disasters their lives have become. 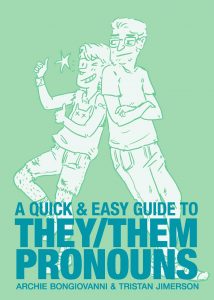 A Quick and Easy Guide to They/ Them Pronouns

Genderqueer writer and illustrator Bongiovanni and cisgender writer Jimerson, longtime friends, present this educational comic guide to gender-neutral pronouns. Speaking to each other and directly addressing readers, they emphasize the importance of inclusive and respectful language.

Jonesy is a self-described "cool dork" who spends her time making zines nobody reads, watching anime, and listening to riot grrrl bands and 1D simultaneously. But she has a secret nobody knows. She has the power to make people fall in love Anyone. With anything. She's a cupid in plaid. With a Tumblr. There's only one catch--it doesn't work on herself. She's gonna have to find love the old-fashioned way, and in the meantime, figure out how to distract herself from the real emotions she inevitably has to face when her powers go wrong...

Summary: Cat isn't happy about leaving her friends for Bahía de la Luna, but her little sister Maya has cystic fibrosis and will benefit from the cool,

salty air that blows in from the sea. As the girls explore their new home, a neighbor lets them in on a secret: There are ghosts in Bahía de la Luna.

Book: The Adventures of Tom Sawyer by Mark Twain 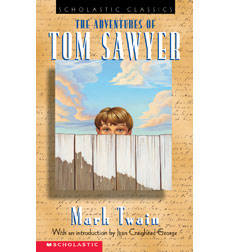 Summary: The Adventures of Tom Sawyer by Mark Twain is an 1876 novel about a young boy growing up along the Mississippi River. The story is set in the fictional town of St. Petersburg, inspired by Hannibal, Missouri, where Twain lived.