Jay Gould: Prominent financier and railroad magnate who showed early interest in construction of subway in the 1870s. He pulled out after testing showed safety hazards.

Cornelius Vanderbilt: Railroad and shipping magnate who also showed passing interest in the subway in the 1870s

Alfred Ely Beach: Inventor who received a charter in 1870 to construct pneumatic (steam-powered) trains. The pneumatic train plan was eventually abandoned due to push-back from political figures and the oncoming Long Depression that lasted from 1873 to about 1879.

Beach blamed both Tweed and Governor John Hoffman for killing his plan.

Mayor Abram S. Hewitt: Elected as mayor of New York City in 1886. During his time in office, Hewitt fought back against the corruption of Boss Tweed, and pushed for the construction of a rapid transit system.

Mayor George McClellan: Elected as Mayor of New York City in 1904 and served until 1909. During his time in office, McClellan christened the first complete subway line on October 27, 1904 and even drove the train for a bit up to Harlem.

William Steinway: Businessman and figure in New York City politics, who pushed for the use of electricity in the subway system as board member of various different rapid transit commissions between 1891 and 1893.

Alexander Orr: Politician and head of New York City's Rapid Transit Commission. Oversaw the contract funded by August Belmont that allowed for the building of the IRT Subway in 1900.

August Belmont: Banker and the head of Interborough Rapid Transit Company. Belmont helped finance the construction of the IRT Subway beginning in 1900.

Beginnings of the first Subway 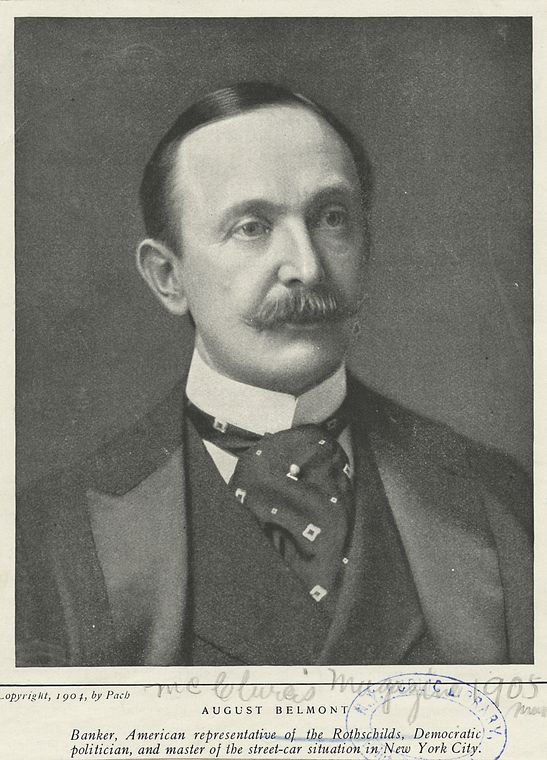 August Belmont, banker and president of the Interborough Rapid Transit Company, pictured here in 1904 (the year the subway finally opened). Retrieved from https://digitalcollections.nypl.org/items/510d47dc-8e5e-a3d9-e040-e00a18064a99

The first routes of the New York City subway were finished in 1904 and came together as the amalgamation of both private and public efforts. It was mainly due to the efforts of the Interborough Rapid Transit Company and its president, August Belmont, yet there were many actors involved for at least two decades before the first lines were complete. The subway came together in a piecemeal fashion. The first line started as early as 1870, as a response to New York City's rapid growth, when inventor Alfred Ely Beach received a charter to create a pneumatic subway car that ran from Broadway to Murray Street. However, financial panic led to the abandonment of Beach’s underground line in 1873. The pneumatic subway also received significant push-back from New York Governor John Hoffman, who was worried about Beach gaining too much power, and Boss Tweed, a prominent and corrupt local New York City politician. 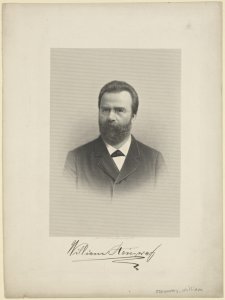 Businessman William Steinway, an important advocate of the use of electricity in trains. Retrieved from https://digitalcollections.nypl.org/items/877fb6ff-5da9-02a2-e040-e00a18060d02

In 1875, the first lines comprised of small steam trains ran on 2nd and 3rd avenue on the east side, and straight through the middle of Manhattan on 6th avenue. Many other plans came and went before the first line was complete. Various private companies were set up, such as the New York Rapid Transit Company, which included share owners such as Cornelius Vanderbilt. Another early interested investor was finance magnate Jay Gould, who lost interest after the discovery of safety hazards. The NYRT  had the intention of creating a line that connected City Hall with New York and Harlem Road at 59th street. However, this idea was too soon abandoned. Mayor Abram S. Hewitt, elected in 1886, took steps to fight corruption and also pushed for the establishment of rapid transit, but to no real avail. In 1891, piano manufacturer and businessman William Steinway advocated for the use of electricity in the trains. Steinway sat on the board of several rapid transit commissions. By 1893, Steinway had grown so weary of the lack of progress and difficulty finding contractors that he threatened to resign from the commissions, but the mayor at that point, Thomas Francis Gilroy, refused to allow him to do so.

Steinway passed away in 1896, but in February, 1900 substantial progress was made towards the building of the underground line. An agreement was drawn up between the Rapid Transit Construction Company, headed by August Belmont--and later known as the Interborough Rapid Transit Company--and the city of New York and its Rapid Transit Commission, headed by president Alexander Orr. It was predicated on a bid won by John B. McDonald and his Onderdonk Construction Company, with financing by Belmont, that allowed for a 50 year lease on all tracks, with engineer William Barclay Parsons headed the engineering efforts. The mayor at this time, who oversaw the agreement, was Robert A. Van Wyck. A few years later, in 1903, George McClellan, Jr. was elected as Mayor and oversaw the completion of the IRT Subway in 1904. He oversaw the opening ceremonies on October 27, 1904, and even took the driver's seat, driving the train up to Harlem.