How can the United States Census help you track down your family's past?

How to start your research

Begin by gathering your data (a known town or city that your ancestor lived in, any addresses, full names of ancestors, look into family history for any dates). Organize your information in such a way that you can easily refer back to it in the future. ​

- This would require you to pay for a service like Ancestry or FamilySearch.

- You can access records from home at any time

Example: Ancestry costs between $24 to $49.99 for monthly access and $99 to $199 for yearly access depending on your research needs. Accessible by the researcher at any point.

- Will require a library card

- Must be on premises to use (sometimes)

Example: New York Public Library card holders have access to the Library edition of Ancestry. Patrons can utilize their database on any branch computer by logging in with card credentials. Recent changes: COVID19 closures have allowed patrons to access the database from home free of charge. Sign up for a library card here.

- Have digitized versions of the census, but search options will require Enumeration District number for specific searches)

(If you are using the NARA website, and want to limit your search to the Enumeration District, go to https://stevemorse.org/#us and search by the census of your choice. The form will populate and you will be required to enter the State, County, City/Town, house number, and street. Cross streets will also further narrow down the ED numbers. You can also search using ED numbers on Ancestry).

This is an example of how a search for an ED number may look like: 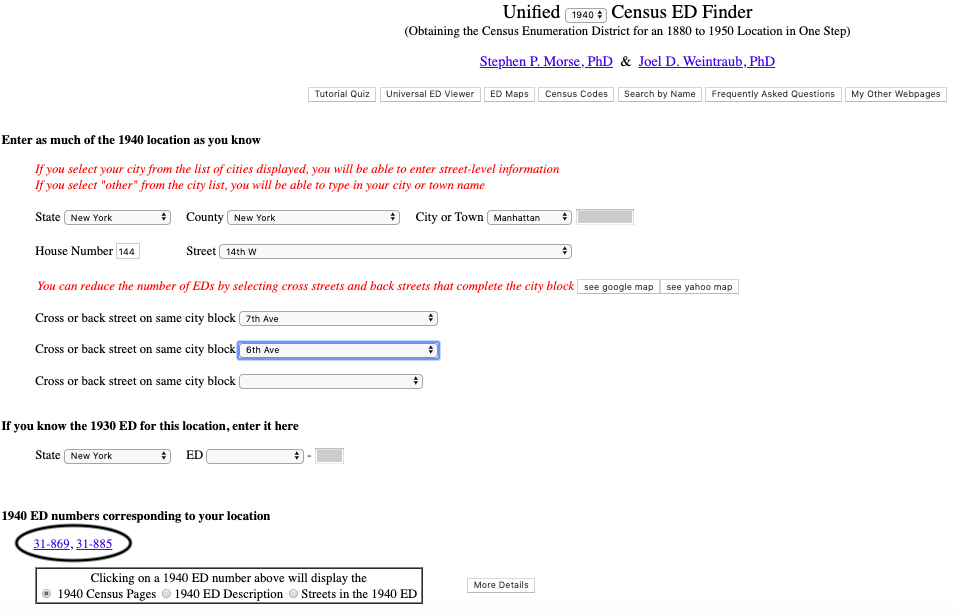 For the purpose of offering a tutorial to this guide, I’ll be using the Library edition of Ancestry from NYPL to research the great-great grandmother of a family friend. Printable pedigree charts can be printed here from Ancestry.

- The place in which she lived (Brewster, Putnam County, NY)

In Ancestry, I entered the information for Margaret in the 1880 Census with hopes that she will show up (tip: Margaret’s birth year was confirmed by an obituary I found on NYS Historic Newspapers. Since she was only 2 at the time of the 1880 Census, I searched using her maiden last name): 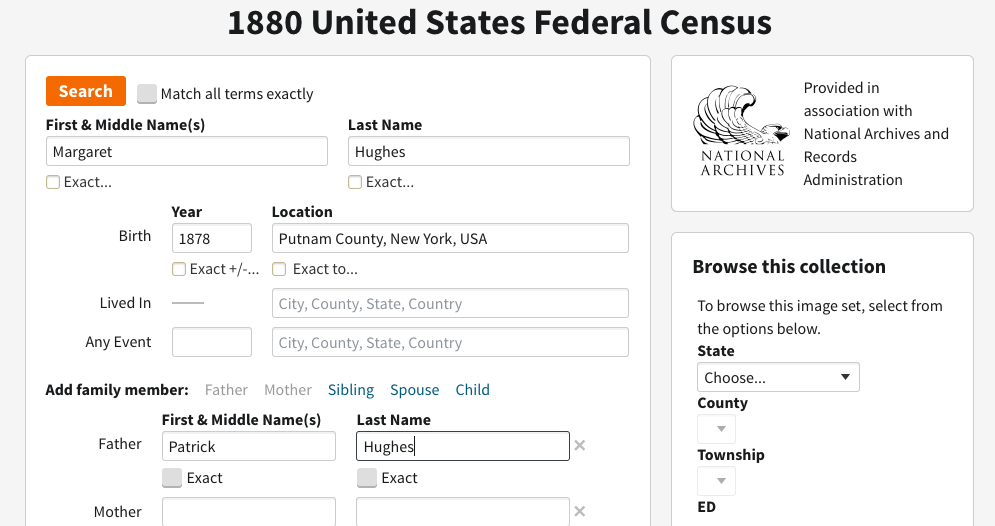 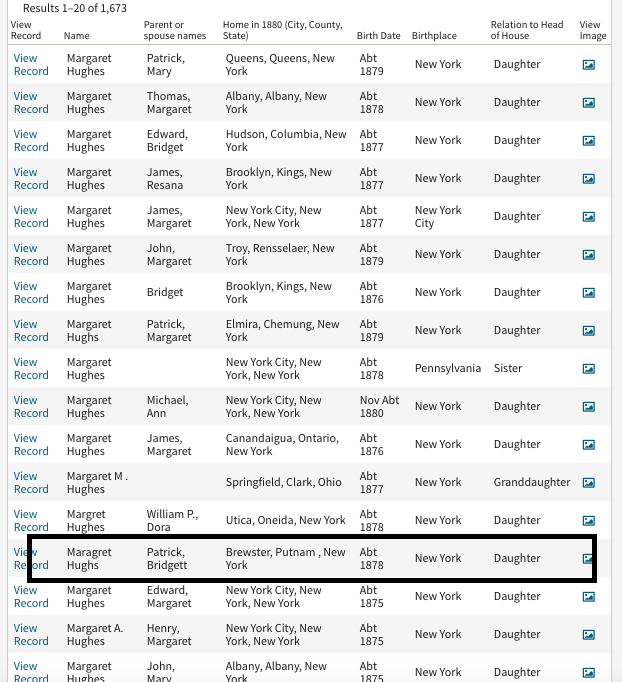 It is from this quick search on Ancestry that I was able to find the name of Margaret’s mother, which is Bridget. The 1880 census also gave us plenty of other information that would give more insight on my friend’s family. From that census, I was able to confirm his occupation as well, which is listed as “blacksmith”.

From here on, I went ahead and moved forward in time, which would be a next step in your own research. The 1890 Census was destroyed in a fire decades later, so I skipped that census and went to 1900. Using the same search criteria, I found Margaret, at age 22, still living with her parents. Patrick, still a blacksmith, has naturalized. The year in which Patrick and Bridget immigrated to the U.S. was also recorded.

I should note that there are some discrepancies in the information recorded. After tracking down the obituary of Patrick and Bridget Hughes, I found out there was a 24 year age difference between the two. In the 1880 census, their age gap was only 9 years. Margaret’s name is also misspelled in the 1900 census. There can be many reasons as to why these mistakes happen, but unfortunately, we do not have the answers to that.